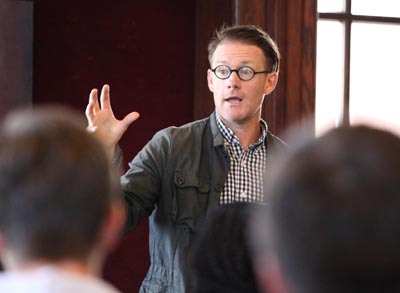 We should challenge the concept of “normal” and instead embrace the things that make us different, this year’s Talbot Speaker, Jonathan Mooney, told Milton students Wednesday morning. Mr. Mooney, an author and lecturer who advocates for people with learning disabilities and attentional disorders, urged students to draw upon their unique skills and personalities to make their mark in the world.

“We have this idea that the ‘good kid’ is the compliant kid; the ‘good kid’ is the kid who sits still and learns quietly,” Mr. Mooney said. “But that’s a narrow definition of what constitutes intelligence, and it leaves a lot of people out. The best innovators and creators are not compliant people. They’re questioners. They challenge what is considered normal.”

Mr. Mooney, a Brown University graduate who has dyslexia and attention deficit disorder (ADD), did not learn to read until he was 12, and today spells at a third-grade level. As a young child, his learning disabilities and mental health challenges made him feel like he was “other than and less than” kids who thrived in traditional education settings. Students with such challenges were separated from the general student populations, Mr. Mooney said, singling them out as “the stupid group,” because they didn’t meet certain expectations or benchmarks, like reading at a young age.

“Learning disabilities and attentional disorders are real challenges, but they are not tragedies,” Mr. Mooney said. “What held me back was the message I got that because I had these differences, I was deficient or defective.”

Mr. Mooney eventually learned that he did not need to be “fixed,” but that certain accommodations could help him learn and succeed. While at Brown, he and a few fellow students founded Project Eye-to-Eye, a mentoring program for students diagnosed as learning disabled or with attention deficit hyperactivity disorder. His first book co-written with fellow Brown student David Cole, “Learning Outside the Lines,” is a guide for students with learning challenges. In 2007, Mr. Mooney published his memoir, “The Short Bus: A Journey Beyond Normal.”

On a recent visit to a software-testing company in Finland that only employs people with autism, Mr. Mooney saw that adjustments to the working environment allowed the employees to do their best work without compromising quality. Finding “a path forward for people who learn differently means reimagining the idea of normal, and avoiding discrimination against people with learning disabilities,” Mr. Mooney told students.