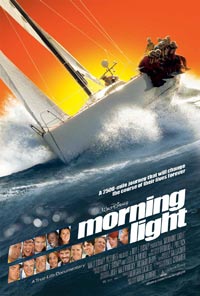 Kit Will ’03 and Charlie Enright ’02 are two of the fifteen young men and women featured in the newly-released Disney documentary Morning Light, which tracks the selection and rigorous training of a team participating in the 2007 Transpacific Yacht Race (Transpac). Selected from over 500 applicants, Kit, Charlie and their 13 teammates raced “Morning Light,” a high-performance 52-foot sloop, from California to Honolulu.  The team—the youngest to ever sail the Transpac—placed third in their division, competing against boats crewed with professional sailors, in a 2,300-mile race.

Charlie graduated from Brown University in 2006 and sailed for Brown’s team in the College Nationals. One of a family of boat builders and sailors, Charlie has been sailing since he was six years old. Kit, a graduate of Connecticut College, began his sailing career off the coast of Cape Cod at an early age. Of the challenges of sailing “Morning Light,” Kit says, “While I was very confident about my sailing ability, I had no doubt this race would push all of us to the extreme of our abilities and test our character. I knew it would be immensely rewarding, regardless of the final outcome.”

The film opened in theaters across the country on October 17.