Former Mustangs Face-off: Milton Alumni on both sides of a Yale versus Holy Cross contest 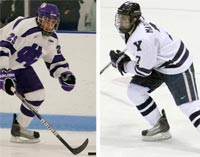 Mike Matczak ’07 and Brandon Nunn ’07—who co-captained Milton’s hockey team in their senior year—recently played on opposite sides of Yale’s Ingalls Rink in New Haven, Connecticut.

Mike is a senior at Yale—the nation’s top-ranked men’s college hockey team for a sixth straight week—and Brandon is a sophomore at Holy Cross. In the match-up, Yale emerged victorious with a final score of 10–3. Both Mike and Brandon scored a goal for their respective teams.

Tom Tysowsky, Milton’s goalie from the Class of 2009, also appeared in the game on the Crusaders’ side.

Milton’s varsity defenseman Robby O’Gara ’12 has just committed to playing for Yale after graduation. He is the first Milton player to wear Mike Matczak’s #15 since Mike graduated. Two years from now he may follow in Mike’s footsteps, wearing jersey #15 for the Bulldogs.

Dan Muse, one of Yale’s assistant coaches, is also familiar with Milton’s rink; Dan was an assistant coach for the Mustangs for two years prior to moving onto college coaching at Williams and now at Yale.