Four from Milton to compete in Kansas City 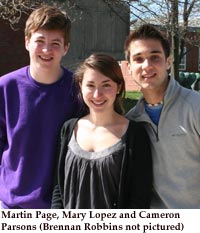 Having earned the opportunity during competitions throughout the school year, four Milton students will vie for titles at the National Forensic League (NFL) annual tournament in Kansas City, Missouri this June. Martin Page (Class III) and Brennan Robbins (Class I) will compete in Congressional Debate. Mary Lopez and Cameron Parsons (both Class I) will compete in the Duo Interpretation category.

The national contestants from Milton qualified by amassing competitive points at divisional tournaments during the year. Looking to gain the ultimate title in their categories, they will represent New England and compete against roughly two hundred other individuals.

According to the NFL, Congressional Debate is individual debate in a large group setting. Legislative debaters research and write Congressional legislation they feel will better our society. At tournaments, debaters speak extemporaneously in defense of or against legislation submitted by attending schools. They listen to other members’ speeches in their chamber, refute opposing arguments, and contribute new arguments to their own side. A student presiding officer facilitates the debate, recognizing speakers and questioners and ruling on motions. Judges evaluate legislators based on argumentation ability, speaking technique, knowledge of parliamentary procedure and overall participation.

Duo Interpretation is a a two-person presentation of a selection that may be either humorous or dramatic. Selections are excerpts from novels, short stories, plays, poetry or other published materials. Presentations are memorized, and delivered without props or costumes in a maximum of 10 minutes (including an introduction).