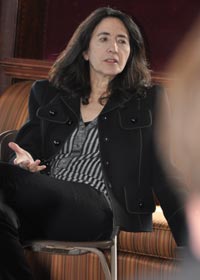 Award-winning author Francine Prose read pages from an unfinished novel to students in King Theatre on Wednesday. Ms. Prose, this spring’s Bingham Visiting Writer, was humorously honest discussing her writing process and the background for the novel she has worked on for five years.

The story grew from a photo titled Lesbian Couple at Le Monocle (1932) by Hungarian photographer George Brassaï, which Ms. Prose saw at a museum exhibit. Brassaï chronicled underground Paris nightlife during the 1930s. In this particular photo one of the subjects was a former French athlete who was banned from competition due to her sexual orientation. Upon an invitation from Adolf Hitler, this woman attended the Berlin Olympics as his guest; she went on to become a spy for the Germans during World War II and was executed by the French Resistance. The complex and fascinating story inspired Ms. Prose to write a novel loosely based on the tale, from the vantage points of various characters.

“I thought, ‘Wow, what an amazing story.’ What could more fun than writing a scene set in the Berlin Olympics from the point of view of a furious lesbian who hates everyone!” said Ms. Prose. After the reading, she met with students in Straus Library and led workshops in English classes.

Ms. Prose is the author of sixteen novels, including her most recent, My New American Life (2011); Goldengrove (2008); A Changed Man (2005) for which she won the first Dayton Literary Peace Prize in fiction; and Blue Angel (2000), which was a finalist for the 2000 National Book Award. Her stories, reviews and essays have appeared in The Atlantic Monthly, Harper’s, The New Yorker, The New York Times, The Yale Review and many other publications. She teaches at Bard College and lives in New York City.