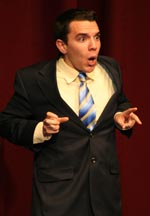 Who doesn’t love to laugh? Frank Smith (I) has used his love of laughter and skill at entertaining to win awards. A member of the Milton Academy Speech Team and the National Forensics League (NFL), Frank was recently awarded the League’s Academic All-American Award.

Each year the NFL presents this award to students meeting several qualifying criteria. The winners must have: accumulated at least 750 NFL points, earning Superior Distinction through participation in local, regional and national tournaments; scored a combined 27 or higher on the ACT or a combined 2000 or higher on the SAT I; maintained a GPA of 3.7 (A-) or higher through five or more semesters of high school; and submitted two character references from his or her school principal and speech team coach.

Frank has been a Milton “speechie” since eighth grade, although he only began to accumulate NFL points in ninth grade. He competes strictly in interpretation events these days, and explains that “there are many different kinds of interpretation—poetry, prose, multiple, play; these are binder events where you don’t have to memorize. What I also do, and what I really enjoy, is humorous interpretation, or duo interpretation, events which do require memorization.”

Excited to discuss his favorite event, Frank says, “I love to entertain people and to make people laugh. I care about what others are sensitive to and the way that they feel, so making other people feel good and feel happy is just the greatest thing. I love to laugh myself, and I am very attuned to the nuances of humor. I pay attention to what people think is funny, and I try to deliver.”

Frank’s comedic hero is Robin Williams, and he has a special affinity for Williams’ role in the 1993 film, Mrs. Doubtfire. “I’ve seen that movie a million times,” Frank says. “[Williams] is just a genius, and he’s so off-the-cuff. His voices, his quick wit—he completely embodies the character he’s portraying. He’s the epitome of great improvisation.” In appreciating the comedic talents of others, Frank notes that, “at the heart of humorous interpretation is conveying the truth: the humanity of people and their situations.”

In addition to this recent award, Frank also won 1st Place in Humorous Interpretation at the Ridge Invitational in New Jersey, and he recently competed in the annual Speech Pentathlon at Natick High School. While other Milton students had already left for winter break, Frank and the speech team were competing at the Holly Speech Festival. Frank was chosen to compete in the five-event Pentathlon only offered at this tournament. He finished 8th in Original Oratory, 4th in Humorous Interpretation, 1st in Play Reading, 1st in the impromptu Press Conference, and 1st in Extemporaneous Children’s Literature; Frank was the overall Pentathlon Champion of the tournament.