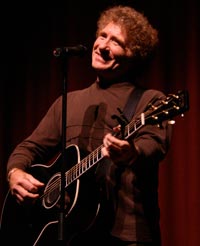 Renowned French singer-songwriter Eric Vincent performed on campus at the Bustin Concert on Sunday, November 2, in King Theatre. Widely acknowledged as a representative for the tradition of French song or chanson, Mr. Vincent tours schools in the United States and other countries to support the teaching and learning of French. With a career spanning 30 years, Mr. Vincent has sung in 140 countries around the world and in 48 of the 50 states. The Bustin Concert will include his original work—written and composed entirely in French—as well as songs by American artist James Taylor adapted by Mr. Vincent into the French language.

The Bustin Concert at Milton Academy is made possible by the Francine L. Bustin Memorial Fund. Established in 1985, the Fund brings French scholars, lecturers, teachers and artists on campus to promote French language and culture.