From Beatnik to YouTube, Student Singers Are A Hit 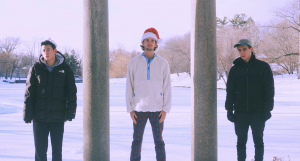 Three students casually singing together their freshman year have turned into an established trio with more than 43,000 subscribers on their YouTube channel. Henry Wilde ’21 and Conner Hartman ’21 became friends in freshman math class and they often discussed their common interest in music. Although Wilde and Hartman did not consider themselves singers, both knew Dash Evett ’21 was one, and the three decided to perform together at that spring’s Beatnik, an open mic event run by students.

At the beginning, they focused on singing covers. “After our first Beatnik, we basically would meet during all our free periods, singing in a room in Kellner,” said Wilde. “Over time, we developed a style. We would spend about two months arranging a song, improvising on it.”

When the pandemic forced everyone to quarantine in their homes, the trio decided to start a YouTube channel as a way for friends and family to hear their music. Hartman says when he loaded up the first video, a cover of “The Misty Mountains Cold” from The Hobbit movie, he typed in their group name as misty., all lowercase with a period at the end, and their official name was born. The video was recorded in a tunnel, which amplified their acoustic voices. Viewership took off after that.

Songs by Ed Sheeran, Simon and Garfunkel, Billie Eilish (one of their favorites), and even a sea shanty followed. They also started writing original songs. “The challenge for us is to write music that retains meaning for all of us, not just the individual, and still resonates with the listeners,” says Hartman.

One benefit of recording during the pandemic is that they learned how to expedite their process working remotely—what once took two months can now take a few days. Usually, they work together late into the night when they are done with homework.

On YouTube, they have found a warm and supportive community and they actively engage with fan comments. Of course, there are the few outlying critics, but Evett says that in the end, “We are our own harshest critics. But we always have each other’s back.”

The three are planning to write a full original album for their senior project and use that time to continue to grow as artists. They also hope to continue their collaboration even though they will be heading in different directions next year.