From Budapest to Belize: Students share their time and talents over spring break 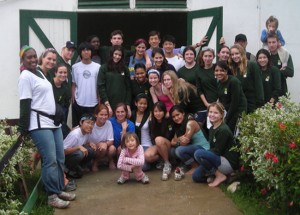 While many use the March break as an opportunity to relax or escape to warmer weather, many Milton students spent their time off visiting other countries while offering a helping hand and sharing their musical talents.

Twenty-five students and three faculty members participated in the Community Service Program’s trip to Belize, South America. Assisted by Peacework, the nonprofit group that helped coordinate previous Milton trips to the Mississippi Gulfcoast, students refurbished the Saint Barnabus School, just outside of San Ignacio in the country’s mountainous interior. Working eight-hour days, they painted and tiled a classroom building and tutored elementary school students in language and mathematics. During free time, the group viewed Mayan ruins, voyaged into the Belizean jungle, and snorkeled off the coast’s famous barrier reef.

On the other side of the Atlantic, the Milton Academy Chamber Singers and Chamber Orchestra spent one week touring Prague and Budapest, performing in churches and concert halls, and visiting castles and other historic landmarks throughout the countryside.

While in Prague, the group toured the Lobkowicz Collection, hosted by Milton alumnus William Lobkowicz ’79. William spoke to the group (wearing his Milton tie) and explained how he recovered his family’s collection of art and musical scores, which includes the original scores of three Beethoven Symphonies, including the fifth, as well as string quartets of Haydn dedicated to William’s great-great-great grandfather. The Lobkowicz Collection also includes the original score of the Mozart orchestration of Handel’s Messiah.

The group performed its first concert to a full house at the St. Salvador Church in Prague and its second in the colonnade hall of the small town of Podebrady. On the fifth day of the trip, the group performed its third concert prior to a mass at the St. Peter and Paul Cathedral outside of Budapest. The students performed their final concert of the tour at a local Renaissance Festival before returning to the United States.