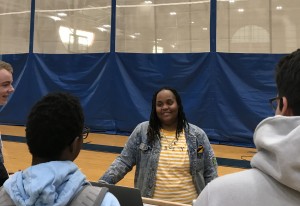 “There are so many things the world calls ugly and my intention is to make them beautiful,” poet and hip-hop artist Lakirya (Oompa) Williams told students at the GASP (Gender and Sexuality Perspectives) assembly. Self-described as “hood, queer, black, womynist, orphan, auntie, sister, friend and teacher,” Oompa performed four of her pieces, which weave personal stories to explore identity, poverty, family and society.

“I tell stories that I’ve felt shame around, about being black, being queer, being a ghetto kid,” said Oompa, who grew up in the Roxbury neighborhood of Boston. “These stories are specific to my life. All of our stories are hugely important, even the ones that you don’t want to tell.”

Oompa spoke to students about how she recently left a career in teaching to focus full time on her poetry and music, and how she had to “get out of [her] own way” to find success. “If you have something to give the world, just go for it.”

Oompa was recently named “Unsigned Artist of the Year” at the 2018 Boston Music Awards, 2017 Women of the World Poetry Slam champion, and a finalist at the 2016 National Poetry Slam. Her debut album, Nov. 3, was named one of DigBoston’s Top 30 Local Albums of 2016, one of Allston Pudding’s favorite albums of 2016, and her sound has been compared to that of Lauryn Hill, J.Cole, and Talib Kweli. As such, she has become a sought-out performer, touring the college circuit and live music venue circuit. Her videos, including, “I Deserve That,” “Spacetime Continuum,” and “Simon Says,” have been used in classrooms nationwide.