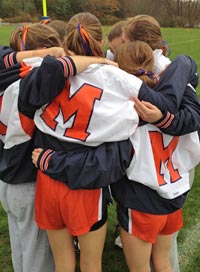 Milton’s cross country runners are league champions. The girls brought home the ISL Championship Cup this weekend, a feat last accomplished by the program in 1983.

“The race was really fast, because the first part of the course was completely flat,” said Maddie Warwick (II). “Many of the girls in the front weren’t giving up. It was harder to pass them, because they stuck with you.”

“During the race you could feel the energy coming from the fans, the other runners, and yourself. Every runner was giving 100 percent of what she could,” said Emily, who clocked a time of 21:09, narrowly beating a St. Paul’s runner in the final straightaway. “You could hear everything from cheers to tears as you were running.”

“We had awesome packs of Milton girls who stuck together throughout the race,” said Mary Ellis (II), who rounded out Milton’s top seven, beating more than half of the ISL field. “I can imagine how intimidating the big pack of orange out in front was for the other teams.”

Friday’s championship race was emotionally charged for Milton’s squad. The team had finished second in the 2011 championships. They lost to Nobles in early-October; it was the team’s only loss in the 2012 season. The Mustangs finished the day with 71 points, beating the second-place Nobles team by eight points.

“Being an ISL champion team feels surreal,” said Laura Barkowski, who passed a key Nobles runner in the final stretch of the race. “I decided to join the cross country team on a whim and, honestly, I have never known a more supportive, fun and motivated group of girls.”

While the varsity race was the premier event of the afternoon, the JV girls’ team were equally dedicated and shined in their own race, finishing in second place. Cassandra Rice (III), new to the program, stunned the crowd and her coaches by steadily moving up throughout the race. Cassandra crossed the finish line in second place—out of 149 girls—with a time of 22:57. Sarah Anderson (I) finished in 15th place (23:32). New runner Sterling Dintersmith (IV) followed in 18th (24:03). Rosamond Carr (II) and Kayla Jang (II) rounded out the JV squad’s top five, finishing together at 18th and 19th place.

The girls are looking forward to the NEPSTA Championship race this Saturday and testing themselves against some of the fastest teams in New England.