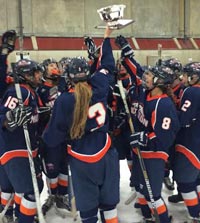 The varsity girls’ hockey team ruled the rink at the Phillips Exeter New Year’s Tourney, winning all four games in the weekend tournament to clinch the championship. It was their first tournament win in the past five years.

After winning games against Stanstead College (2-1) and Brooks School (5-4), the team beat Rice Academy 3-2 in a three-player shootout where goalie Hannah Congdon (III) stopped all three shots and Captain Katherine Flaherty (I) scored the lone Milton goal. During the game, Maria DiMartinis (III) scored both Milton goals and Hannah made 24 saves.

That shootout win gave Milton’s Mustangs the top seed in the championship game against Rivers School, where they beat Rivers 3-1 on goals by Anne Malloy (II), Maria DiMartinis (III) and Jen Costa (III). Hannah made 20 saves in goal.

“It was an impressive weekend,” says Coach Ryan Stone. “We played as a team throughout. We showed great resilience, coming from behind to win in our first two games. There was awesome effort throughout the entire weekend and other coaches remarked on how hard our team worked. I am very proud of the team’s effort and look forward to our continued improvement as a program.”