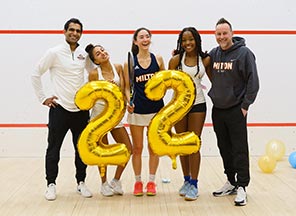 The Milton girls’ squash team won the Independent School League—for the first time in more than a decade—with a 6–1 win over Noble and Greenough last month. They went on to finish 12th at the U.S. Squash National tournament in Philadelphia in early March.

Senior co-captains Rhea Anand and Olivia Greenaway said the team’s powerful dynamic and motivation contributed to their success following two losses (to Andover and Deerfield) to kick off the season.

“Winning the ISL this season was a huge accomplishment for the team because it had been 12 years since we last won the title,” Anand said. “The whole team really dug deep during the final match against Nobles… Aside from the results themselves, the drive and camaraderie displayed by the team—both during ISL matches and at nationals—was inspiring, and I know that they will continue to do amazing things in the years to come.”

Head coach Kush Kumar, an internationally ranked professional player, joined Milton in December. Despite the first two losses, Kumar said, the team got even more serious about training, sparking a winning streak that carried through the rest of the ISL season. The personalities on the team clicked well, he said.

“I knew they had the potential,” he said. “I wanted them to perform at their highest level. As we went on, I got to know them better, to understand their backgrounds, and they really began to work hard and enjoy playing, and they gave it everything. I couldn’t have asked for more from them.”

“I knew they had the potential. I wanted them to perform at their highest level. As we went on, I got to know them better, to understand their backgrounds, and they really began to work hard and enjoy playing, and they gave it everything. I couldn’t have asked for more from them.​”

Winning the ISL, particularly after not having a season the previous year due to the pandemic, was a spectacular moment “that the team can carry for the rest of their lives,” said Kumar, who sees a bright future for girls’ squash at Milton.

One of the standouts on the team was Milton’s #1 player, Sohaila Ismail ’23, a nationally ranked player from Egypt who was undefeated during her regular season matches. Ismail finished second in the New England Class A finals; eighth-grader Lily Bourell, Milton’s #2 player, finished third in Class B. Milton won the sportsmanship award at New Englands as well.

The team combined a strong mix of ages and experiences, with players from across the globe, said Greenaway, who noted that she and Anand made a specific effort to build and nurture bonds among the players.

“Despite all of our differing ethnic backgrounds, religious beliefs, nationalities, skill levels, and socioeconomic statuses, we formed long-lasting friendships and bonded over a shared passion for squash,” she said. “This year we had international players from Egypt and Jamaica, a nationally ranked player, and a phenomenal player who is currently only in the 8th grade.”

At nationals, which were held at the Arlen Specter US Squash Center in Philadelphia, the team had a rematch against Deerfield, one of the two teams they lost to early in their regular season. Milton won 5–2. “This redemption demonstrated the team’s ability to take a loss and view it as motivation rather than defeat,” Anand said. 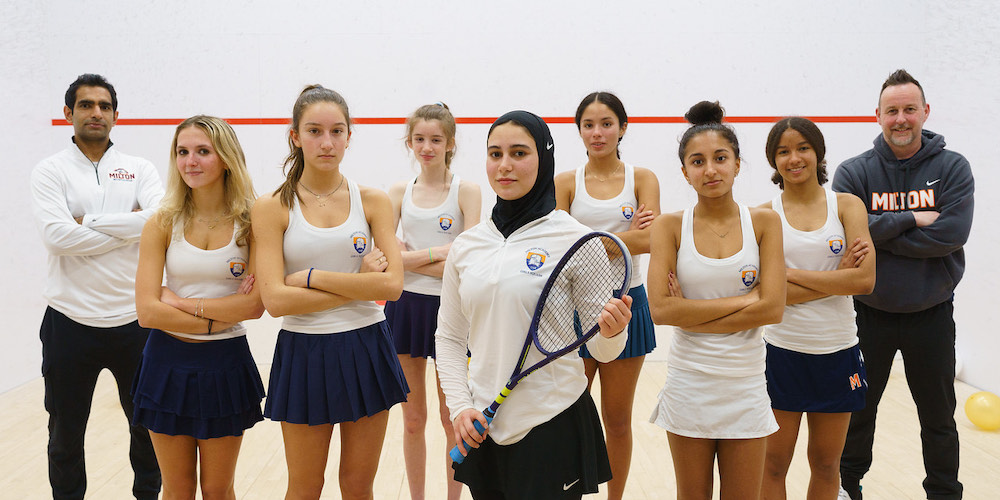