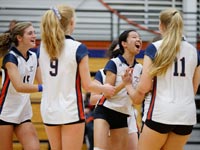 Most fall athletes compete outside, on the fields and trails around campus. For members of the girls’ volleyball team, however, the action is inside the ACC. The varsity team just completed a successful season with a record of 11–8.

Head Coach Derek Palmore says wins against two strong teams early in the season “shifted the girls’ confidence and made them realize their capabilities.” Senior co-captain Debbie Lee says another early-season game, when the team lost to Choate, also helped them realize their potential.

“Even though we lost, we played really well against the number one team in New England,” says Debbie. “We learned to bring it together as a team.”

Co-captain Marina Fleites (II) is one of the team’s strongest players, also competing on an outside club team. Most players, however, picked up the game in Class IV and improved their skills over time, like Jamie Murray (II) who has grown into an excellent offensive player, according to Coach Palmore. Both Marina and Jamie were recently chosen to play in the NESPAC tournament.

“This season we had great team spirit,” says Debbie. “Skill wise, our fundamentals were much better. The whole team was enthusiastic about improving. We worked hard on perfecting our passes and set-ups, and making sure our hits were ‘kills’ instead of just points.”

While the team just missed qualifying for playoffs, their hard work sets a solid foundation for next year’s season.