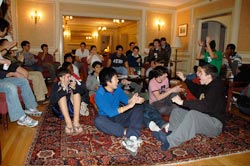 The boys of Goodwin House celebrated earlier this week when they learned the results of their house-wide energy saving/recycling competition sponsored by the student group Goodwin Goes Green (3G). Over eight weeks of competition—led by student environmental proctors and 3G members—the boys tried to cut down on unnecessary energy use by turning off lights, fans and computers when they were not in their rooms. They’ve been matching discarded items with the correct recycling containers. Further they have prepared containers for recycling by removing lids from plastic bottles, emptying them, and keeping recyclables from straying into the trash bins.

Goodwin faculty members tracked students’ progress weekly and, together with 3G members, they devised a prize structure. With an efficiency track record of over 90 percent, the boys earned the top prize of a house feast. In addition, each week the occupant of one of the “green” rooms earned the title Eco Hero of the Week—an honor accompanied by five dollars worth of snack bar bucks.

Environmental Proctor Chris Cote is “stoked,” and he “can’t wait to get this going in other dorms.” Members of Hathaway House and Robbins House are discussing plans for similar competitions.