Governor Deval Patrick ’74 Will Address the Class of 2012 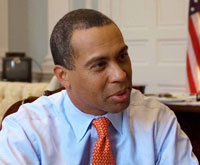 Massachusetts Governor Deval Patrick, Milton Academy Class of 1974, will deliver the commencement address to this year’s graduating class. Governor Patrick was elected to office in 2006 and is now serving his second term as the state’s first African-American governor.

Born and raised in Chicago, Deval came to Milton in 1970 as part of the A Better Chance program, which provides “access to quality education for thousands of young people of color… who can compete effectively in schools, colleges and the workplace.” (abetterchance.org) Classmate Anna Waring ’74, a fellow ABC alum, met Deval during the summer program before they both matriculated at Milton. “Friendly, sweet, serious about his work and compassionate,” is how she describes Deval as a 13-year old.

Deval was at Milton during years of violent, racial turmoil in Boston. How did he navigate those times and retain the optimism that has magnetized others as they came to know him as governor? “He has a profound ability to see the biggest possible picture,” Will Speers ’75 says. “That [perspective] has served him throughout life—when he was unwelcome in certain restaurants during law school, or trying to get a taxi on Pennsylvania Avenue late at night after a meeting in The Oval Office. He acknowledges that these things are out there, they’re part of life, but they don’t reflect on him.”

Deval graduated from Harvard College and Harvard Law School, where he was president of the Harvard Legal Aid Bureau. After clerking for a federal judge, he led a successful career in the private sector as an attorney and business executive, rising to senior executive positions at Texaco and Coca-Cola. In 1994, he was appointed the assistant attorney general for civil rights, the nation’s top civil rights post.

“Deval was and is a great listener,” says Will. “He pays attention. He wants to hear from you. He would not let himself be categorized. Even when he joined a prestigious law firm, he continued to do—on a pro bono basis—the kind of legal work he had done for the NAACP’s Legal Defense Fund. When he moved into the corporate world, he brought in, rather than left behind, that work, which was a big part of who he was.”

Deval’s journey to political office broke new ground. Marked by creativity, innovation, optimism and relentless grassroots efforts, Deval and his campaign staff galvanized a diverse group of volunteers and supporters, including many Miltonians—students and alumni.

Deval honors Milton frequently: he is grateful for the experience of community here that profoundly affected his life. Generating that sense of community—understanding that “we have a stake in the dreams and struggles of others” as he says—is a core element of his political vision.

Deval tells his story in his memoir, A Reason to Believe: Lessons From an Improbable Life. He and his wife, Diane, have been married for nearly 30 years and live in Milton, Massachusetts.