Grace Connor ’17 Has the Scoop on Building a Business 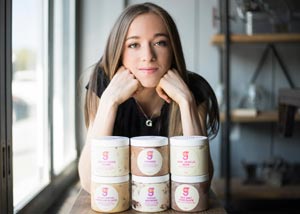 After trekking through a snowstorm to deliver her first pints of Little G Ice Cream to a specialty grocer in Boston, Grace Connor (I) had a flash of doubt. “I was putting it into the freezer and thinking, ‘What did I put all my time and money into?’” she remembers. “After a week, they called and told me that all my ice cream sold out, and they wanted to order more.”

This was in January 2016, six months after Grace landed a spot in the start-up food production space CommonWealth Kitchen at the age of 16.

“I didn’t have much capital,” she says. “There’s a small fee to get started. I had enough money to buy an ice cream machine, which I got at less than half price. I got a pro bono lawyer, a pro bono designer, and everything else, I just figured out myself.”

One year later, Grace has been featured on the “NBC Nightly News,” and in People Magazine, the Boston Globe and countless other publications. Her ice cream is sold at several stores in the Boston area, and by the end of the month, will expand to 40 Whole Foods stores in the Northeast. As her business grew, a backstory unfolded: Grace thought up the idea for the Little G Ice Cream Co. while recovering from surgery to remove a brain tumor at 15. Now, she brings her ice cream into hospitals to cheer up young patients.

Grace always loved ice cream, but her first foray into business was a baking company. She began baking at the age of 6, and soon started taking orders from friends and family. A few years later, she started making ice cream and all its mix-ins from scratch—even the base is handmade.

“I’d heard about CommonWealth Kitchen. I actually applied there when I was 8, because I wanted to make cookies there. I got pretty far along into the process because I hadn’t told them I was 8,” Grace says. “I knew I needed to get in there to make ice cream, because my parents weren’t going to give me any money. I wasn’t going to get a loan or an investor at that point. I used all the money I’d made from baking. If I picked up a penny on the sidewalk, I would save it.”

Sheer persistence got Grace in the door at the kitchen. After she was accepted, she navigated the bureaucratic maze of permits and plans needed for professional food production. Ice cream is highly regulated—Grace has to go through monthly lab testing for every flavor she develops. She jokes that she built her business on her iPhone, Googling examples for health code permits and other papers she had to file.

As an industry, gourmet ice cream makers have branched into some unusual territory, with flavors like blue cheese, bone marrow and fennel. Grace opted for more familiar tastes, with a dozen flavors like hot chocolate and marshmallow crispy treat.

“I wanted to create recognizable flavors that are fun and exciting, and I make everything from scratch, using the best-quality ingredients I can,” she says. “The flavors are nostalgic.”

Little G is a full-time business. In addition to distributing ice cream to retailers, customers can buy it anywhere in the country by ordering it online. Grace balances her job with her classes at Milton by maximizing every free moment.

“I know that when I’m at school, I’m here to focus on my schoolwork, so if I have five minutes between classes, I’ll take out a book. When I’m on the bus, I study,” Grace says. “There’s a lot of time in the day. If I use that time effectively and plan ahead, there’s more than enough time to get everything done.”

Being a regional brand is not enough for Grace, who has her sights set on opening her own production facility, getting a distributor and hiring staff to help Little G grow. She is seeking investors, and may open a brick-and-mortar ice cream shop in the future. During an interview for a news feature, a reporter asked if she thought it was neat to see her products next to Ben & Jerry’s in a store freezer. “I’ll be happy once it’s next to Ben & Jerry’s everywhere across the country.”

Grace recently appeared on the “Rachael Ray Show.” You can watch the clip here.