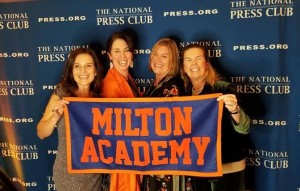 Ali joined Milton as a freshman from a public school background and says it was a huge and wonderful change.

“I loved the relationships with the teachers at Milton,” Ali shares. “They made me feel more like an adult. I remember with special fondness my French teacher, Mr. Moore, whom I adored and who inspired me to go on a year abroad in France my junior year. That was life altering and I think directly led me to a career that is essentially constant learning and exploration.”

Ali also credits Milton with teaching her to write. “That skill made my career,” Ali says. “I find writing easy. Hard to be a journalist without that.”

Prior to joining NPR, Ali built her career in print journalism, where she won several awards—including three George Polk Awards—as an economics, finance, and investigative reporter.

She spent two years at the Center for Public Integrity, leading projects in financial, telecom, and political reporting. Her work as both reporter and editor on the foreclosure crisis in Florida, on Warren Buffet’s predatory mobile home businesses, and on the telecom industry were honored by several journalism organizations. She was part of the International Consortium of Investigative Journalists team that won the 2015 Polk Award for revealing offshore banking practices. Prior to joining the Center, Alison spent more than a decade at Bloomberg News, where she wrote about the convergence of politics, government, and economics.

In reflecting on her time at Milton, Ali described her classmates as exceptional artists, violinists, squash players, actors and debaters. “I loved how students at Milton were able to express their many talents. The students seemed to appreciate excellence however it manifested itself.” At the induction ceremony, some of those classmates—now lifelong friends—were there to celebrate her accomplishment. Congratulations, Ali!