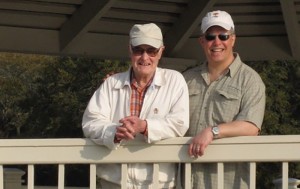 William Weeks Sr. ’44 and his son, William Weeks Jr. ’79, are celebrating their 75th and 40th reunions, respectively, during Reunion Weekend, June 14-15.  Although Milton experienced many changes in those thirty-five years, one thing remained the same: inspirational teachers left a lasting impression on both of them.

Bill Sr. recalls Herb Stokinger as a wonderful teacher and mentor, filling multiple roles both on and off the field, while Bill Jr.’s French teacher, Marie Louise Baumlin, had such an infectious passion for French literature that Bill and other students were quoting from the classics outside of class.  And Frank D. Millet’s long tenure meant both father and son were influenced by his dedication as a teacher, admissions director and a coach. “Who can forget his beautiful calligraphy, whether it be on a welcome letter to Milton or a simple thank you card,” says Bill Jr. His father became friends with Mr. Millet, participating in regular get-togethers. Bill Jr. recalls running into Mr. Millet in Boston many years after his own graduation from Milton. “He was probably in his 90s, and he was still as gracious and sharp as ever,” he says.

Both father and son hope to attend Reunion Weekend to reminisce with classmates, and to see how the School has changed—and stayed the same—over the years. For more information on Reunion Weekend, visit www.www.milton.edu/reunion.