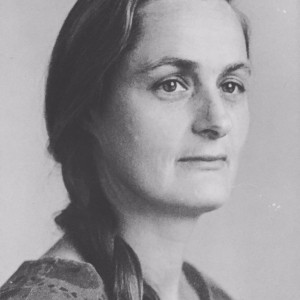 Kay Herzog died on February 18, 2018 in Oxfordshire, England after a lengthy illness. While she always expressed a dislike for the euphemism “died peacefully,” that is what she did: slipping into death seemingly without pain or fear.
Mrs. Herzog taught English at Milton Academy from approximately 1959 to the early 1990’s. She originally came to Milton with her daughter Anne Udy intending only to teach for one year, and then return to Cambridge, England. However, during that year she met Bradford Herzog, then Boy’s School mathematics teacher and House Master of Forbes House, and they were married in June of 1960.

During her long tenure at Milton, some of the highlights of Mrs. Herzog’s career included being the co-creator of both Senior Spring Projects and the Arts Program. She was head of the English Department for many years, and responsible for over-seeing the development of the English curriculum during the years that the Girl’s and Boy’s School merged to become one. She was also one of the faculty members responsible for creating and developing the student-teacher program at Milton in the mid-1980’s designed to assist in training teachers who aspired to work in private schools. Mrs. Herzog was the co-author of Visions and ReVisions- A Pictorial History of Milton Academy, and was a recipient of the Milton Medal.

However, if one asked Kay what was important to her during her time at Milton, and indeed during her time as a teacher, she would focus on the joy she found in stimulating a student’s innate intellectual curiosity, and promoting independent, critical thought, and supporting her students to be fearless in stating their ideas, and defending their perspective. She eschewed the more traditional teaching techniques with which she had been initially trained, and developed and embraced a model of teaching that was collaborative, respectful of student’s ideas, and dedicated to engaging students both in the classroom and during their studies. Perhaps the key to all this was that she herself never stopped learning, honing her craft of teaching, or thinking actively about her students.

Kay Herzog loved Milton Academy. She used to admit that she loved all parts of life at the school, even faculty and committee meetings. However, this was not an unalloyed love: she would (and did) express criticism if she disagreed with a direction the school was taking, and she was not afraid to express a differing opinion. She gave a good deal of her life, her creative energy, and her love to her students and her colleagues at Milton; even after she retired, she maintained contact with many of her colleagues and former students.

Mrs. Herzog leaves a daughter, Kathy Herzog (class of 1980); and two grandchildren and their families by the late Anne Udy (class of 1967).