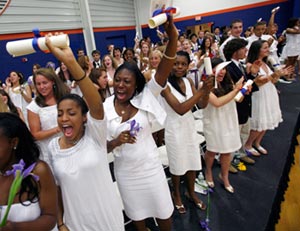 One-hundred-eighty-five seniors received their Milton Academy diplomas during the School’s graduation exercises on Friday, June 6, 2008. A longstanding tradition of the ceremony is the election of student valedictorian speakers to assure seniors that they will, at their last Milton gathering, hear from classmates they have chosen. This year’s student body elected Samuel Panarese and Elizabeth Bloom. Delivering the commencement address was alumna Jehane Noujaim, Milton Academy Class of 1992. Jehane is not only a successful, young, provocative documentary producer and filmmaker; she is an international activist who believes passionately in the power of film to help move people toward global acceptance of diversity.

Click here to read speeches and view photos from the 2008 graduation ceremony.