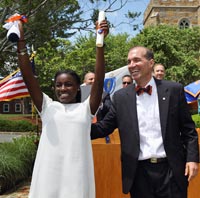 Family, faculty and friends stood witness as 171 members of Milton Academy’s Class of 2014 made an end to their time at Milton during the School’s graduation exercises on Friday, June 6. As is tradition at Milton’s commencement, graduates and faculty were led by a bagpiper as they made their way from Straus Library to the ceremony on the quad. Following an invocation by Chaplain Suzanne DeBuhr and welcome by Head of School Todd Bland, student speakers, Sydney Park and Valentine Ora—elected by classmates to speak on their behalf—addressed the audience. Before receiving their diplomas, students also heard from this year’s graduate speaker, television and film producer Betsy Beers ’75.

Click here to read speeches, watch the ceremony, and view photos from the day.