Great White Sharks Among Us 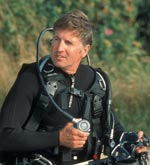 Great white sharks have been in the local news since Labor Day weekend, when large populations of gray seals drew them to Massachusetts waters, just off the beaches of Chatham. Dr. Greg Skomal, aquatic biologist and the area’s leading shark expert, spoke with students as this year’s science lecturer addressing the truth about white sharks, why they get a bad reputation, and how we can learn more about them.

One of Dr. Skomal’s professional goals as a marine biologist is to help maintain populations of aquatic life—fish and sharks—in a way that’s sustainable, protecting them from over-fishing or illegal killings. Dr. Skomal began his presentation, titled Jaws Revisited: The White Shark in New England, by trying to debunk common myths about sharks. The connotation associated with great white sharks is one of danger, perhaps instigated by the movie Jaws in the 1970s and perpetuated by today’s media. In his presentation, Dr. Skomal showed a collection of television news clips that aired this year surrounding the white shark sightings off of the Cape and islands; “This is a media frenzy,” he said, “which is different from a shark frenzy, and—I would argue—more dangerous.”

While studying a dead shark is helpful in learning about its biology, it does not teach us anything about its ecology or migratory habits. For that, Dr. Skomal explained, we must rely on technology. The newest technology that Dr. Skomal and his colleagues are employing is Pop-up Archival Transmitting (PAT) Tags. Scientists attach a PAT Tag to the shark’s dorsal fin—which, he explained to students, likely feels similar to getting your ear pierced; the tag then collects and archives data on water temperature, depth and location, and at a pre-programmed date and time detaches itself from the shark, floats to the surface of the water and transmits to the scientists’ computers, via satellite, the information it recorded over the previous months. Researchers recently completed a study on the migratory patterns of the basking shark using PAT Tags, and the information they learned redefined what they know about the sharks’ distribution and habits.

Dr. Skomal earned his bachelor’s and master’s degrees in zoology at the University of Rhode Island and received his doctorate in biology at Boston University. He conducts research out of Woods Hole Oceanographic Institute and travels the world studying the physiology, life history and ecology of aquatic life, promoting the importance of ocean conservation. He is the author of The Shark Handbook: The Essential Guide for Understanding the Sharks of the World.