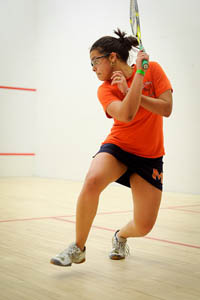 Squash standout Yuleissy Ramirez ’11 was the under-19 champion at the National Urban Individual Championships, which took place in June at Williams College.

“It was very exciting,” said Yuleissy, who played for the SquashBusters team. “In the final match, I won the first two games and felt confident. I lost the next two games, and it can be hard to come back after that. I went back on the court telling myself I wasn’t going to lose.”

Yuleissy won that final game 11-4 and captured the championship. Chris Kane, her former squash coach at Milton, isn’t surprised: “She has incredible belief in herself and she knows how to dig in and work hard. She is a fun player to watch.”

Yuleissy began playing for SquashBusters when she was in sixth grade. Based in Boston and Cambridge, the nonprofit organization was the first urban youth enrichment program to combine squash, academics and community service. Yuleissy was initially drawn to the social and community service aspects of the program; when she came to Milton in her Class IV year, her athletic talent was obvious and she played on the varsity team.

“I loved going to practice at Milton. Mr. Kane was always pushing me, and I gained a lot of experience. I learned what my strengths were, what my weaknesses were, and what I needed to work on,” Yuleissy says.

By her senior year, she was the team’s captain. At the end of a successful season, she was voted the team’s Most Valuable Player and voted All-League Player by the ISL coaches. She also won the Juniors Sportsmanship award from Massachusetts Squash.

“Yuleissy was an incredible leader both on and off the court,” says Chris. “We had a lot of new players last season, and she was an important presence. She was the anchor and did a nice job of building cohesiveness among the players.”

Yuleissy will take her academic and athletic talents to Harvard University in the fall. She plans to study pre-med and to stay involved with SquashBusters, the program that kicked off her illustrious squash pursuits.