Heather McGhee ’97 Discusses The Sum of Us 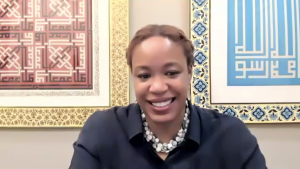 When Heather McGhee ’97 left her dream job to set off on a journey around the country to explore racism and inequality, she was driven by “frustration with nearly 20 years of working to bring more nice things to more people in this country,” she said. “By nice things, I mean universal healthcare; childcare; paid family leave; reliable, modern infrastructure; a real, robust public health system; and well-funded schools in every neighborhood.”

What she discovered was that big needs in society were going unmet and that this “was impacting all of us, not just people of color who are disproportionately among the impoverished and the uninsured, but also white people who are the largest share of the impoverished and uninsured.” But many white people continue to support policies or politics that go against their best interests because of racism and the fear of a rising demographic that is not white, she added.

McGhee discussed her best-selling book The Sum of Us: What Racism Costs Everyone and How We Can Prosper Together with alumni, parents, and friends of Milton on a webinar hosted by the Office of Development and Alumni Relations in partnership with the Los Angeles Regional Chapter. Lee Pelton P’17, Emerson College President, served as moderator.

McGhee was born on the south side of Chicago and her family moved frequently in the area when she was growing up. “I know what it is to have or to not have wealth, to have debt collectors calling and feel trapped and suffocated, to feel like you can’t move or make any progress in life because you’re always behind. The shame of it, the sort of despair of it. Both my dad and mom were brilliant and accomplished and yet, Black, right? So, they didn’t own houses until I was late in high school, early in college.”

McGhee found her way to Milton Academy because her mother was on a nonprofit board with a woman who had sent her child to boarding school. “This was a completely unheard of thing to do,” says McGhee, but at age 11 she was first sent to a middle boarding school in western Massachusetts. “It was moving from urban to rural, moving from Black and mostly Black and diverse to completely white.”

From there, McGhee chose Milton because it was close to Boston and more diverse than other schools she was looking at. She then graduated from Yale University, briefly taught English in Barcelona, and then moved to New York City to work with the non-profit think tank Demos. After taking a break from Demos to work first with Senator Elizabeth Warren and then on John Edwards’ presidential campaign, she returned to lead Demos in 2009. She continued her work immersed in the American economy as she testified in Congress, drafted legislation, and developed strategies for organizations and campaigns to win changes to improve the lives of millions.

On the webinar, Pelton asked McGhee about a “transformational moment” before she started her book project when she appeared on CSPAN in August 2016. A white man named Gary called in to the show to confess that he feared Black people. “He asked you how he might change and you listened with just enormous compassion and curiosity,” said Pelton.

“So it was during the intense, racially charged campaign summer and I was doing a fair amount of TV at the time, all live television, so you never know what to expect, but that was definitely a curveball,” said McGhee. “I was there to talk about the economy, wages, and student debt. But I am curious about people. If someone’s going to share their story with you, you kind of have to listen. … In many ways, that exchange, its virality on the internet and then getting to know Gary, as I have over the years, informed my conviction to write the book.”

McGhee said that moment made her realize that “I can speak about issues of race in a way that is audible to white people. I’m sure my experiences in mostly white schools from age 11 through to college have a tremendous amount to do with that. It also convinced me that there was something missing in the story of racism’s cost, which was the cost to all of us and the dimension that we could tell some stories about the ways in which racism was a poison first consumed by its concocters.”

For her book, McGhee traveled to states like Alabama, California, Mississippi, and Maine, and spoke with all kinds of citizens from auto workers to housing activists to local politicians. McGhee said overall it was an emotional experience.

“Generally, the book is a sort of long exercise in empathy and trying to sort of project myself into the shoes of other people and groups, and find some way in which there is this common thread, this link that connects our fates,” she said. “And yet, there are some things so principally evil about the way that this system has continuously found ways to steal from Black people and then blame them for it.”