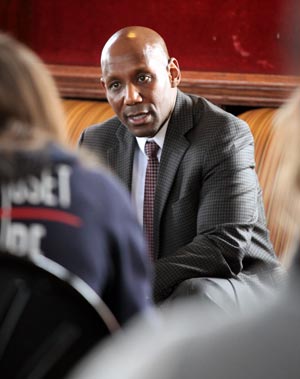 “Institutions that promote the pursuit of truth and knowledge need to be honest about themselves,” Professor Craig Steven Wilder told Upper School students. Professor Wilder, an MIT history faculty member and author, was this year’s Heyburn Lecturer.

In researching and writing his latest book, Ebony and Ivy: Race, Slavery, and the Troubled History of America’s Universities, Professor Wilder revealed nearly universal connections between early American educational institutions and slavery, explaining, “No college or university established before 1800 survived without the slave economy.”

Professor Wilder focused his lecture on Erasmus Hall Academy, founded in the Flatbush neighborhood of Brooklyn by Dutch colonists in 1786. Colonial New York was a hub of the Dutch slave trade; several slaveholders and traders gave money to establish Erasmus Hall, which was “as much a commercial and political enterprise as it was an academic one.” The school recruited students from several states and countries by boarding them with slave-owning families, who received an income from the school, Professor Wilder said. Approximately 25 percent of all black people in Kings County, New York, were owned by Erasmus’ charter trustees.

Following the lecture, Professor Wilder spent time with students in American history classes, where he answered questions. Colleges and universities maintained connections with slavery even after it was abolished in the states, Professor Wilder said. Harvard, for example, sent students to a plantation in Cuba for agricultural research. Only in the last decade have East Coast colleges acknowledged their dependence on slave labor, he said.

Professor Wilder’s interest in educational institutions’ history on issues of race and slavery grew while he was teaching at Dartmouth, which has a strong Native American studies program. He learned that indigenous people were enrolled in schools for 200 years before black Americans were granted entry. The disparity was the result of colonists’ drive to displace Native Americans and dilute their culture, he said: it made conquest easier and reduced the cost and military burden of physically conquering people.

“It illustrates the way colleges are connected with the economy,” he explained. “Educating natives is a foundation of colonization, in which the colonizers are engaged in cultural warfare. But educating black students threatened the slave economy. The educational system was deployed to conquer some people and enslave others.”

Professor Wilder said his writing is not intended to cast schools in a negative light, but to remind people of “the centrality of slavery in American history.” Asked by a student whether students of color should apply to and attend such institutions, Professor Wilder said yes.

“The most important decision you make as a student is not about the history of the institution but the fit between your personality and the institution,” he said. “Your decision is a personal, three-dimensional one, and not some grand statement about American history. The way it’s going to make the greatest impact is if you thrive in that institution.”

Professor Wilder received his bachelor’s degree from Fordham University, and did his graduate studies at Columbia, where he received his master’s degree, his master of philosophy degree and his doctorate. In addition to Ebony and Ivy, he is the author of A Covenant with Color: Race and Social Power in Brooklyn; and In the Company of Black Men: The African Influence on African American Culture in New York City. His recent essays include: “War and Priests: Catholic Colleges and Slavery in the Age of Revolution,” in Slavery’s Capitalism and “‘Driven . . . from the School of the Prophets’: The Colonizationist Ascendance at General Theological Seminary,” the inaugural essay in the digital journal New York History. In 2004, Columbia University awarded Professor Wilder the University Medal for Excellence during its 250th Anniversary Commencement.

The Henry R. Heyburn ’39 Lecture was established in 1991 to commemorate Mr. Heyburn’s deep love of history and geography and his dedication to Milton as a student, parent and trustee.