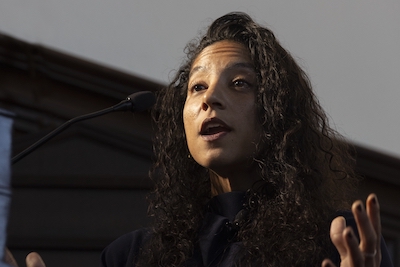 Acts of rebellion and resistance in American social movements have received vastly different responses from police and mass media—based on the race of protesters—since the foundations of the country, this year’s Heyburn lecturer Elizabeth Hinton told Milton students.

Hinton, an author and Yale professor who researches poverty, racial inequality, and urban violence in the United States, described the history of Black protest movements and their characterization as “riots,” even when they were peaceful in origin. In order to understand the disproportionate response to Black social movements, we have to look at history, she said.

“Slave patrols, which were America’s first real system of organized law enforcement, were charged with suppressing potential insurrection among enslaved people by raiding slave dwellings, by dispersing gatherings among enslaved people, and by patrolling the areas around plantations,” Hinton said. “And these essential duties became the foundational logics of American policing: That is, maintaining order through the surveillance and social control of people of color.”

Rhetoric that classifies Black protesters as looters or criminals has affected police response to protests from the earliest movements for racial justice to the “War on Crime” of the mid-20th century through the 2020 protests following the police murder of George Floyd, Hinton said. In contrast, waves of white supremacist violence such as murderous lynch mobs in Springfield, Illinois in 1908, East St. Louis in 1917, and Tulsa in 1921, have been downplayed as one-off events or forgotten by history, Hinton said.

Uprisings by Black citizens should be seen not as rashes of criminality but as “a period of sustained insurgency, as a rebellion against authority,” Hinton argued. Such movements have pushed for equality in the areas of employment, housing, education, and law enforcement—and represented meaningful community efforts to right the unjust treatment of Black Americans.

“The most effective approaches to crime prevention involve programs that respond to community needs and grant control of public safety to residents, especially in areas where the state has failed,” Hinton said. “New investments into preschool programs, job-creation measures, mental-health treatment, college scholarships, and reconstituting the American criminal legal system based on the principle of repair instead of retribution would make for a safer society and a stronger democracy.”

The Henry R. Heyburn ’39 Lecture in History Fund was established in 1991 to support an annual lecture in history and commemorate Mr. Heyburn’s love of history and geography and his many years of association with Milton as a student, parent, and trustee. Hinton is an associate professor in the Departments of History and African American Studies at Yale University, with a secondary appointment as professor of law at Yale Law School. She is the author of From the War on Poverty to the War on Crime: The Making of Mass Incarceration in America and America on Fire: The Untold History of Police Violence and Black Rebellion Since the 1960s.