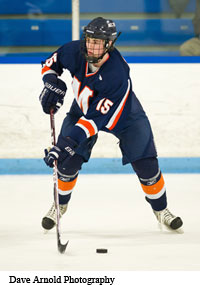 Before his junior year, Long Island native Rob O’Gara (I) made a decision to transfer to Milton Academy.  That decision led him to new academic and athletic opportunities, and for the School’s hockey team, Rob was a great addition. The defenseman helped the team win the NEPSAC Championship this past winter, and this month Rob was selected 151st in the fifth round of the NHL entry draft by the Boston Bruins.

“It’s a surreal experience and I still feel like I’m on cloud nine,” said Rob. “It’s such an honor to be chosen and see all the hard work come to fruition.”

Hockey coach Paul Cannata said Rob’s being drafted was anticipated as a number of teams followed him and indicated their interest in the 6’2″ blue-liner during the season. Still, Rob said that seeing his name appear on the screen, while watching the draft picks online with his father at home in Massapequa, New York, was an exciting moment.

“Rob is one of the steady eddies,” said coach Cannata. “He is a very good student and a high caliber athlete. He is consistent day in and day out. He is always reliable, responsible, and honest both on the ice and around campus as a member of the community.”

Ironically, Rob’s former teammate, Patrick McNally ’11, was drafted last year by the Vancouver Canucks. Patrick will play for Harvard University in the fall.

Rob returns to Milton in the fall as a senior and will attend Yale University the following year.  As for the Bruins, Rob will attend their development camp from July 6 to July 12.

“I’m looking forward to skating against tough competition. I saw some of the names of players that are going to the camp, and the thought of playing against some of these guys is very exciting.”