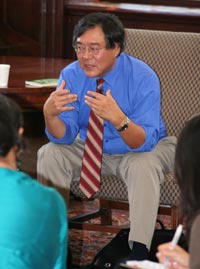 A Japanese American originally from Murray, Utah, Dr. Paul Watanabe knows firsthand of the Japanese internment that took place in the United States following the Pearl Harbor bombing. He recalls that his brother, only five days old at the time, and mother were sent to an assembly center—essentially a former horse stall at the Santa Ana racetrack in California—and later to a concentration camp in the early 1940s. For Milton students, he traced the history of the internment initiative: it was supported numerous times by the Supreme Court, and it spawned multiple and diverse reactions among Japanese Americans. The question of that time is the question of today, he said.“What is the right balance between preserving civil rights and protecting national security?” Dr. Watanabe of the University of Massachusetts Department of Political Science, Milton’s ninth annual speaker in the Hong Kong Distinguished Lecture Series, posed the question.

He compared Americans’ response to Arab Americans following the September 11 tragedy to the response toward Japanese Americans during World War II. The need, he said, for the government to make distinctions between “us and them” internationally is easier to manage than drawing that line domestically. He implored students to understand the impact on Americans among us who end up caught in a web of suspicion and innuendo, whose self-esteem is taken away, whose identity is challenged. He pointed to the young Sikhs living in New York who wear turbans on their heads over their long hair, which is sacred to their beliefs. “Cutting their hair is going entirely against the will of their heritage and their family; cutting their hair is like cutting out their hearts, and yet following the September 11 attacks, many of them did it,” Professor Watanabe explained. “It was the price these individuals paid in these circumstances because it was the price of getting by.”

Dr. Watanabe described the Japanese Americans detained in the 1940s as “resourceful” and “heroic.” Some, despite their government-imposed detainment, answered the military draft from their concentration camps, serving in a much-decorated regiment. Others resisted, often to devastating consequences. Draft resisters served time in federal prison. “My mother refused to disallow her allegiance to the emperor of Japan because she had never vowed allegiance to him in the first place,” Dr. Watanabe recalls. “Although born in the U.S., she was stripped of her citizenship because of her position.” Though no mass removal of populations has occurred in the United States following the September 11 attacks, people of Arab descent have experienced surveillance, interrogations, and detainment. Dr. Watanabe shared recent Gallup poll results revealing that 1/3 of Americans still believe that internment camps are a reasonable practice.

“When someone, because of his race, religion, or ethnicity is held in suspicion,” Dr. Watanabe concluded, “we all potentially become the victims of suspicions ourselves. It is not so easy to draw the line between us and them. Aren’t we all diminished and damaged in some significant way when others people’s sense of self, identity and dignity are compromised? I want this nation to be secure, but I also want it to be worth securing. I want it to be worth dying for. You can’t often have it both ways: all freedoms all the time, or all security all the time. You have to figure out the balance—the reasonable and rational limitations both to preserving freedom and protecting security.”

Dr. Paul Watanabe received his doctorate from Harvard University. At the University of Massachusetts, Boston, his interests are international relations, the foreign policymaking process, strategic and defense policy, American political behavior, and ethnic group politics. He is co-director for Asian-American studies, and is co-author of A Dream Deferred: Changing Demographics, Challenges and New Opportunities in Boston. Dr. Watanabe has authored many publications and his articles have appeared in Political Psychology, World Today, Public Perspectiveand Business in the Contemporary World.