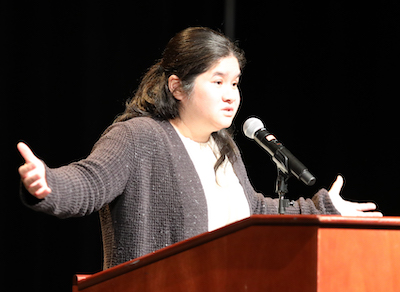 Born in Vietnam, Lisette Le moved with her family to Akron, Ohio, at the age of 6, and was one of just a handful of Asian American students in every school she attended. She had to quickly learn English, losing some of her Vietnamese language skills except when she translated for her parents.

“There’s a major intersection among race, immigration, and class that shapes our country and our familial structures,” said Le, this year’s Hong Kong speaker. “My story is an individual’s story, but it’s in the context of systems and policy.”

“We are not a monolith,” Le said of the area’s different Asian communities. “There are many different stories about how and why people come to the United States.”

Chinatown is Boston’s oldest Asian community, first populated by Chinese immigrants who were recruited to Massachusetts to work as strike-breakers in the late 19th century. Language barriers and an exploitative economy prevented workers from complaining about abuses; workers lived with one another in tent cities for protection and community. “They kept their heads down and did the work they needed to do,” said Le.

Le is the executive director of VietAID, a hybrid community development corporation and social service organization in Boston. VietAID serves more than 5,000 people each year through the following programs: affordable housing development, bilingual pre-school, youth development, social services and older adult programming. Previously, Le was the director of the Massachusetts Voter Table, a part of the national State Voices network, a non-partisan statewide coalition of community and advocacy organizations that seek to build the political power of low-income people, new citizens, young people, and communities of color.

The Hong Kong Distinguished Speaker Series was established in 1998 by former Trustee Helen Lin ’81 and more than 100 graduates living in Hong Kong to support a speaker to help educate faculty and students about Asian perspectives.