Honors Geometry Students Go From Trail to Map to App 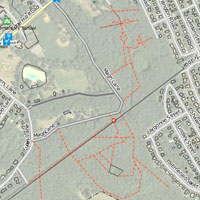 Armed with satellite images and colored tape, 13 Honors Geometry students ventured to Cunningham Park with a mathematical mission: to develop an accurate map of the park’s walking trails, suitable for public use.

“Taking what we are learning in class, and seeing how that math can be applied in real world situations, felt so practical, and really cool,” says Rachel Handler (IV).

Math faculty member Matt Simonson planned this field trip project as a hands-on way for students to complete their unit on graph theory. He first tasked students with organizing themselves and determining what supplies they would need. They requested six colors of tape and markers. On a damp, drizzly morning, the group headed to the park, breaking into groups of two or three.

“The system we came up with was to mark the trails with tape as we went along,” says Rachel. “We made up names for the trails and trail intersections and wrote that on the tape. Each group started at a different section in the park and marked off on their maps as they went along. Our tape didn’t stick well due to the rain, which was a challenge, but we improvised by tying the tape around different objects.”

“Over three hours, the group developed a solid model of how the trail system works,” says Mr. Simonson. “Using graph theory, they showed how different points are connected. In the end, they identified 50 different intersections on over a dozen trails.”

Back in the classroom, the student teams combined their individual maps into one comprehensive version. The final task was posting the map online at openstreetmap.org, a user-generated map website that interfaces with various map apps.