How Images Shape Perception: A Lesson from Professor Bonnie Miller 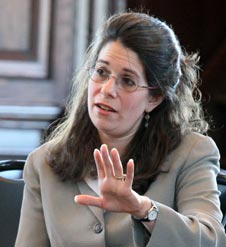 This year’s Henry R. Heyburn ’39 Speaker, Professor Bonnie Miller spoke with students about how historical images from the 19th century convey and perpetuate the state of race relations in America during that period. Ms. Miller is associate professor of American Studies at University of Massachusetts, Boston. Her research focus is the role of visual and other popular media forms in shaping the politics of gender and race.

“We can gain insight into popular beliefs of the past by studying images from that period,” says Professor Miller. “Images are historical documents, not illustrations. Each image has its own story to tell.”

Professor Miller shared examples of advertisements for minstrel shows from the mid-1800s, in which white actors performed as black characters, depicting African Americans as lazy and unintelligent. Professor Miller says these shows, which were widely popular across the country, “spread a united image of blacks to both rural and urban populations in the North and the South” causing people to “see these perceptions as normal.”

Professor Miller also showed images from the early career and eventual success of P.T. Barnum, who developed shows of “living curiosities.” One of Barnum’s most famous exhibits debuted in 1860 at a museum in Manhattan. This exhibit displayed an African American man in a way that suggested to audiences that he was the missing link between monkey and man. This exhibit, employing various actors over time, lasted for 70 years.

“This display made the audience look on with wonder—what we call ‘the gaze’—and question the existence of this person. This is an act of power and a way to mark this man as inhuman. And millions of people saw this exhibit,” says Professor Miller.

Professor Miller earned her Ph.D. in history at Johns Hopkins University. She is the author of From Liberation to Conquest: The Visual and Popular Cultures of the Spanish-American War of 1898, in which she argues for the importance of visual images in shaping the political debates surrounding the Cuban crisis and the imperial aftermath of the Spanish-American War. At UMass Boston she teaches courses in visual culture/media studies and American social and cultural history from 1600 to present.