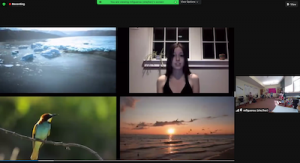 From sharing first-person testimony and creative work to advocating before legislators, students from Boston-area private and public schools spent Friday exploring how the humanities can influence action on issues of climate change and climate justice.

“We do not all suffer the same climate injustices,” read a Milton student from Melissa Figueroa’s Performing Literature class, which created a “found poem” curated from the words of Boston climate leaders and other community members. “We sacrifice aspirations to implement actions we know aren’t right, to the detriment of the state’s poorest and most vulnerable residents. We have let low income communities, communities of color, bear disproportionate burdens while excluding them from the decision-making process.”

The Humanities Workshop’s Youth Summit was a virtual event during which students from participating schools shared some of their work from the past year. The Humanities Workshop, co-founded and co-directed by Milton English teachers Alisa Braithwaite and Lisa Baker, is a consortium of educators and students from seven local schools who tackle major social issues through the lens of the humanities. The consortium schools are Academy of the Pacific Rim, Boston College High School, Boston Collegiate Charter School, Boston International Newcomers Academy, Boston Latin School, Milton Academy, and Phillips Academy Andover.

Following morning sessions where students demonstrated their work, and a keynote address, students received training in advocating for climate legislation from the advocacy group Our Climate. They ended the day in breakout sessions with Massachusetts state legislators, encouraging support for legislation related to climate education and stricter emissions standards.

The summit’s keynote speaker was Salvador Gómez-Colón, an Andover senior and activist who earned recognition for his response to Hurricane María in 2017. Gómez-Colón, who is from Puerto Rico, attended ninth grade on the island. He recalled sheltering with his family during the harrowing night when María made landfall and the devastation he observed in the days and weeks following.

Seeing the urgent needs in his community, Gómez-Colón created the “Light and Hope for Puerto Rico” campaign, which raised nearly $200,000 and provided 3,500 underserved families with solar-powered lamps and hand-crank washing machines (many people were in contact with raw sewage following the hurricane). He has since led other disaster-relief missions, received international media attention, and spoken at the World Economic Forum’s annual meeting in Davos, Switzerland.

“I wanted to harness my empathy and give comfort to those in despair,” Gómez-Colón said about launching his first campaign. “I began to observe and recognize people’s needs and two things stuck out: the absence of power and the lack of clean clothing. The first seemed to me like a no-brainer. The absence of power and light was a threat to both physical and emotional health.”