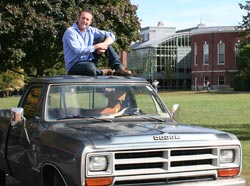 Alumnus Ian Cheney has joined the ranks of the elite in radio and television broadcasting as a Peabody Award-winner for his documentary film, King Corn. Established in 1940, the George Foster Peabody Awards honor excellence in broadcasting and recognize the most outstanding achievements in electronic media, including radio, television and cable. (www.peabody.uga.edu) In King Corn, Ian and best friend Curt Ellis move to the heartland of America to learn where our food comes from. With the help of friendly neighbors, genetically modified seeds and powerful herbicides, Ian and Curt plant and grow a bumper crop of America’s most-productive, most-subsidized grain on one acre of Iowa soil. When they try to follow their corn into the food system, what they find raises troubling questions about how we eat—and how we farm. Ian will receive his award at a ceremony hosted by NBC Nightly News anchor Brian Williams in New York City’s Waldorf-Astoria on May 18.