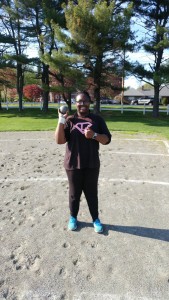 Undefeated and breaking records, Amanda “Ify” Ofulue (I) wrapped up an amazing track and field season by winning the New England Championships (NEPSTA D1) in both shot put (41’ 10’’) and discus (129’ 10’’). In both events, she broke Milton school records and she set a facility record (Loomis Chaffee) in discus. Ify was also an ISL Champion in shot put, setting an ISL Championship record and an ISL Champion in discus. She topped it all off with second place in javelin, scoring a total of 28 of Milton’s total 72 points, which placed the girls third overall in ISLs.

“In my opinion, she will be remembered as the greatest female throw athlete in Milton Academy’s history and in the ISL,” says Coach Steve Darling. “I don’t foresee her records being broken for a very long time, maybe ever. An athlete like Ify only comes around once in a lifetime. I’m just glad I was here to witness it.”

Ify, a boarder from Nigeria, says she really committed to the sport when she came to Milton her sophomore year. This season, she switched her throw technique from the glide method to the rotational method with the encouragement of Coach Darling. “Coach thought I had reached my maximum potential using the glide method and that I would throw more consistently farther if I tried rotational. At first, it was weird to learn, but then I started getting really good results.”

Ify is one of three captains along with Cianna O’Flaherty (I) and Lily Wright (I). “She’s been a great captain,” says Coach Darling. “She’s always the first to arrive and one of the last to leave. Having Ify on the team is similar to having another assistant coach at practice due to her maturity and her experience competing. Ify is very easy to coach, but what I enjoy most is that she is comfortable sharing with me her own thoughts and opinions regarding her technique and therefore we both learn from each other.”

Ify will be attending Brown University this fall and will compete on Brown’s track and field team.