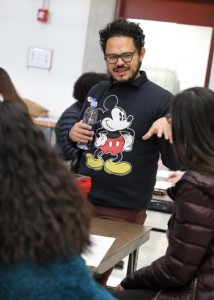 Raúl the Third, an illustrator, author and painter, found his first artistic inspiration in a library.

Born Raúl González in El Paso, Texas, the artist explained that his mother—frustrated with staying in a tiny apartment with three young boys—dragged the family to a public library. Mr. González recalled two sensations he would love forever: air conditioning and the smell of books.

He and his mother got to know the librarians, who would recommend books that helped them learn English. One time, a librarian asked Mr. González to describe a book.

“She said, ‘If you can’t tell me what your favorite part was, why don’t you draw it for me?’” he recalled in a talk with visual arts students during the Nesto Gallery assembly. “From that point on, every time I read a book, I created an illustration for it.”

Mr. González’s exhibit, “Vamos, Let’s Go to the Art Show,” opened in the Nesto Gallery, located in the lower level of the Art and Media Center, last month. It runs through December 14. The Nesto Gallery is open weekdays from 9 a.m. to 4 p.m.

He also spent time working with students, sharing his techniques and inspirations.

At the assembly, Mr. González described how images from his childhood in El Paso and Ciudad Juarez, Mexico, inform his artwork today. The rocks and plants of his surroundings, along with the sights and sounds of the marketplace in Juarez that he visited frequently, appear in sun-bleached color in his comics and picture books. He encouraged students interested in drawing to start with themselves, as he sketched a quick self-portrait, and incorporate familiar images and people into their work.

“Look around,” he said. “There’s always something to inspire your art.”

Raúl the Third has written several books, including the Lowriders in Space graphic novel series and ¡Vamos! Let’s Go to the Market, a picture book for young readers. Lowriders in Space was nominated for a Texas BlueBonnet award in 2016-2017 and Mr. González was awarded the prestigious Pura Belpré Award for Illustration by the American Library Association for Lowriders to the Center of the Earth. He was also a contributor to the SpongeBob Comics series.