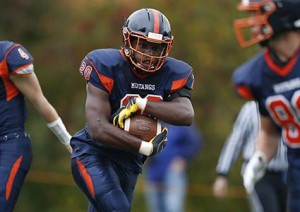 Each week, their opponents get tougher, but the varsity football team continues to dominate on the field with an undefeated season (6-0). Last Saturday, it was 48-25 victory against Belmont Hill,  a team that also came into the game undefeated. The home game in front of a Parents’ Weekend crowd showed the deep depth of Milton, led by team captains Kalel Mullings ‘20 and Jake Willcox ‘20.

An exciting win (20-14) in overtime against Governor’s Academy the previous weekend saw wide receiver and defense back Mitchell Gosner ‘20 blocking a field goal to tie up the game and then scoring the winning touchdown, catching a stellar throw from quarterback Jake.

Before that game, Head Coach Kevin MacDonald anticipated that it would be a challenging game. “We are a pretty well-rounded team. Usually a high school team will have at least one glaring weakness. But, we are playing other teams that are also well-rounded and loaded with talent.”

Before the Governor’s game, Milton’s biggest win came against St. Sebastian’s (34-21), always a solid team and tough competitor. There are two more regular games of the season, including the Milton-Nobles game. Coach Mac said one of the team’s goals is to make the NEPSAC (New England Preparatory School Athletic Council) championship game.

Coach Mac said the team has great leadership in the two captains, Jake and Kalel, who was just selected to play in the All American Bowl game. Many of the seniors will go on to play college football, but for now they are focused on continuing their exciting winning season.