In Case You Missed It: Success of a Milton Golfer 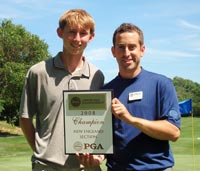 Leif Jacobsen ’08 won this year’s New England PGA Junior Championship, held at Brookline Golf Club on July 9 and 10.  Leif shot rounds of 71 and 74 to finish the two-day tournament at three over par.  Tied with Ian Thimble of Hyde Park, Leif and his opponent competed in a one-hole playoff.  Leif made a two-putt par on the eighteenth hole to clinch the trophy and a trip to the National PGA Junior Championship, which was held in August at TPC River Bend, outside of Cincinnati, Ohio.

Leif was the senior captain of Milton’s golf team this past spring and is beginning his first year at Wesleyan University.