In Memory of Mr. Chun: Arcade Games for All 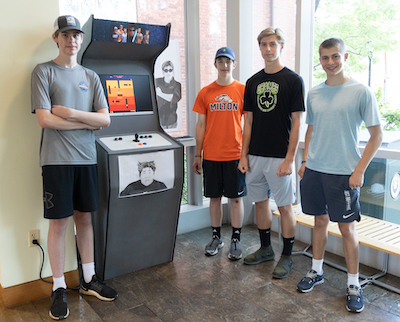 If it was mechanical or electrical, Kendall Chun tinkered with it: He restored vintage radios, brought failing home appliances back from the brink, built his own electric guitar. If something he made or fixed could bring happiness to others, even better.

Chun, the electrical engineer-turned-Milton computer programming teacher, always had multiple projects going at once. His joy of creating something by hand was infectious, leading him and a handful of students to the off-campus Milton Makerspace, a warehouse where they could work on builds that extended beyond classroom projects. Notable creations include last year’s augmented-reality sandbox, and an arcade cabinet with a functioning program that would allow users to play thousands of classic arcade games.

“It started with Mr. Chun,” said Austin Kinnealey ’23. “He loved arcade games and he was so enthusiastic about this idea, so it caught on. It’s something that everyone can enjoy.”

The students were making great progress on the arcade project—the cabinet had been designed and fabricated, then assembled, housing a computer that provides access to the games—when Chun fell ill in the spring from a recurrence of cancer. Chun, who was also the director of the school’s Outdoor Program, died on April 26.

One of the most difficult parts of the project remained incomplete. The students had to figure out how to wire the physical elements of the cabinet (such as buttons and controllers) to the program, so that users could effectively manipulate a wide variety of games. Without Chun’s engineering expertise, the electrical steps of the project would be significantly harder to figure out, but the students were undeterred. They had to finish it.

Some of the students working on the project, like Will Glick ’24, had some experience designing and 3-D printing things, but nothing on the scale of the arcade project. Chun introduced them to an I-PAC board, which serves as an interpreter between the mechanical aspects of a game—pressing buttons or moving joysticks—and the computer function, like making Super Mario jump on screen.

“Being able to design something and make it with your own hands—rather than pressing a few buttons and pulling it out of a printer—is so rewarding because the first physical iteration we had was just made out of cardboard. Even with that little cardboard box that we duct-taped together, we were able to sync it up to play, so we spent an afternoon playing classic arcade games. It was a pivotal moment, seeing that we were really doing it.”

The students brought the arcade cabinet to the Schwarz Student Center in June, where they set it up for a trial run. It was unpainted—they were bandying about some design ideas—but it worked. An open-source program gives them free access to classic arcade games, and plans are in place to load some student-designed games in the future. After a return to the Makerspace and some additional design work, the plan is to install the cabinet permanently in the student center for anyone to play; a nice break from a busy day and a fitting tribute to a beloved teacher.

Finding and learning the software for the games themselves was not too difficult, said Tommy Wideman ’23, “because there’s such a big community online of people who love these games. We were able to follow their lead to set it up and make whatever little changes we needed to.”

Thomas Wideman, Tommy’s father and a friend of Chun’s, helps supervise projects in the Milton Makerspace, a site near campus where makers are able to develop and work on projects. The first project that Milton students worked on was the augmented-reality sandbox—now located in the Pritzker Science Center as a tribute to Chun—where users can manipulate the topography of the “sand” and create rain using an Xbox Kinect Sensor. With Chun’s help, the students learned Linux, the operating system they used to program the sandbox, to design, build, and operate it.

“Kendall’s students were really close to him,” Thomas Wideman said. “He just loved to make stuff, and getting the kids to make stuff. Someone said at the celebration of his life, ‘He was a man who had too many projects and not enough time.’ He could cover everything, from fabrication to electronics to hardware, and he was a go-to for students who wanted to create.”

To make the arcade cabinet, students used computer-aided design (CAD) to draft the plans. Dovi Hirsch, a woodworker at the Barney & Carey lumber company—and a climbing friend of Chun’s—donated his time to precisely cut the wood, following the students’ design.

Shortly before Chun died, Thomas Wideman told him that the students planned to press on with the project as a tribute; Chun was happy to hear it. His presence remains strong with the students, they said.

“He helped us with so many things,” Glick said. “But his greatest contribution, I think, was the energy and happiness he brought to being with us and creating something together. A meaningful part of this project was that we realized that it’s completely fine to spend a year doing something that doesn’t have a purpose beyond ‘it would be awesome to do.’ That, in itself, is not a frivolous thing.”