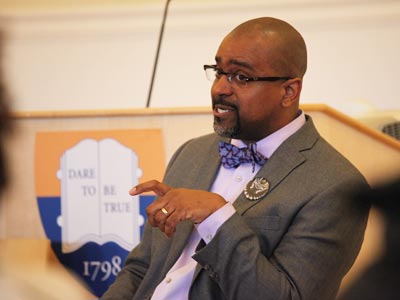 Mr. Hall visited campus as the Onyx Assembly speaker in recognition of Black History Month. A former prosecutor, Mr. Hall described policing, courts and the prisons as the “criminal legal system,” as opposed to the criminal justice system.

“For so many people, there is no justice in the system,” he told students, encouraging them to work toward changing unjust practices. “You have to educate yourself about what the roots of of these issues are: why it is happening, where it is happening, and to whom this is happening. There is a role for people to play in deciphering and sharing that information. We need economists and statisticians who can analyze how incarceration impacts communities. We need health professionals to look at how incarceration impacts families; the health impacts for children of incarcerated people; and how and why mental illness and substance use are overrepresented in our prisons.”

To understand the racial disparity in America’s prisons, it’s important to consider the historical and structural factors that support it, Mr. Hall said. When slavery was abolished with the 13th Amendment, the phrase “except as a punishment for crime” in the amendment paved the way for convict leasing, a practice through which white landowners could have black laborers convicted of minor crimes work their plantations.

Through the years, government policies have established barriers to black people’s access to education, voting rights, employment and homeownership, making it significantly more difficult for black families to attain multi-generational wealth, Mr. Hall said. In Boston, the median household net worth for white families is $247,500, compared with just $8 for black families, according to a comprehensive survey by The Boston Globe.

Now, so-called “tough on crime” laws rely heavily on policing and incarceration to address social problems, rather than investment in programs that help people achieve success, such as education, mental health care, employment and substance use-prevention. Mr. Hall noted that a jail in Boston spent $66 million to house inmates, almost twice the investment into a community college in a predominantly black neighborhood. Punitive school discipline, which in Massachusetts disproportionately impacts black students, is an early component in what is known as the “school-to-prison pipeline,” isolating and pushing students out of classrooms and into risk.

Prior to joining the ACLU of Massachusetts, Mr. Hall was the deputy director of the Lawyers’ Committee for Civil Rights and Economic Justice, where his work included policy and legislative advocacy, community outreach, and maintaining a litigation caseload of voting rights, police misconduct and public accommodations cases.

Mr. Hall also served as an Assistant District Attorney for the Suffolk County District Attorney’s Office. In addition to leading the ACLU of Massachusetts’ Racial Justice Program, Mr. Hall also serves on the Massachusetts Legal Assistance Corporation’s board of directors, the Hyams Foundation’s board of trustees, and he co-chairs the Boston Bar Association’s Civil Rights and Civil Liberties section. He is also a member of the Massachusetts IOLTA Committee. Mr. Hall is admitted to practice in Massachusetts and the United States District Court for the District of Massachusetts. He is a graduate of The Ohio State University (B.A.), Northeastern University School of Law (J.D.) and Andover Newton Theological School (M.Div.). He is an ordained reverend in the African Methodist Episcopal Church.