Interactive Comic-Mystery at Milton: The Wedding Not to Miss 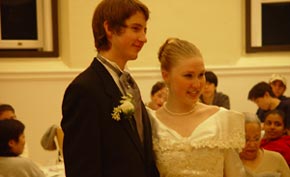 Perhaps the first play of its kind at Milton, You May Now Kill the Bride drew its audience (that is, guests at the wedding) into the web of comedy and mystery that developed over the course of the evening. Guests at the ceremony might have picked up the foreshadowing of trouble. If not, conversations with the just-mingled family members while sitting at the linen-covered tables and sipping “champagne” led to a sense of unease that erupted before long into a full-scale debacle.

The cast and directorial team had developed an original script with a play loosely based on the events and timeline of a wedding. All the actors created their own characters and their dialogue was based on extensive improvisational development of character histories, both individual and shared. Performers stayed perfectly in character while they interacted with the audience and other members of the cast. Comic themes and personalities meet the dark dynamics of jealousies, competition and revenge. The evening culminates in a vote, taken among the guests, as to who’s delivered mischief in the form of threatening notes, thrown bricks and shocking revelations. (Hint: The butler didn’t do it.) The second 1212 production of this academic year was inventive, dramatically demanding, and great fun for the “guests.”