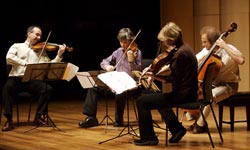 One of the world’s premiere string quartets, the Takács Quartet, performed on Sunday, February 22, at the 79th Annual Gratwick Concert in Straus Library.

The Takács Quartet performs ninety concerts a year worldwide, performing throughout Europe as well as in Australia, New Zealand, Japan and Korea. The Quartet’s multi-award winning recordings include the Late Quartets by Beethoven that in 2005 won Disc of the Year and Chamber Award from BBC Music Magazine, a Gramophone Award and a Japanese Record Academy Award. Their recordings of the early and middle Beethoven quartets collected a Grammy, another Gramophone Award, a Chamber Music of America Award and two further awards from the Japanese Recording Academy (www.takacsquartet.com).

The Gratwick performance series was established by former Milton Academy faculty member Dr. Mitchell Gratwick as a gift to the School in memory of his wife Katharine Perkins Gratwick, a cellist and graduate of the Girls’ School, Class of 1924.  Fostered through the present by family members, it has continued as an unbroken tradition for 79 years.