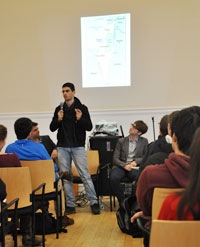 Four Israeli students from Brandeis University spoke about working towards the coexistence of Israeli Jews and Israeli Arabs at the Jewish Student Union Assembly. Gil Zamir and Aviva Glick, both Israeli Jews, and Ashraf Hussein, an Israeli Arab, are Slifka Scholars; and Chen Arad, an Israeli Jew, is a Malkin Scholar. These scholarships bring Israelis to Brandeis who are interested in fostering dialogue and action between Jews and Arabs in Israel.

The students spoke about their backgrounds and how their interests in working towards co-existence developed. Within Israel, excluding the West Bank and the Gaza Strip, the population is roughly 80 percent Jews and 20 percent Arabs. Throughout most of the country the groups have little daily interaction.

Gil explained to Milton students that the public education system in Israel is divided into three categories—the Arab schools, the secular Jewish schools and the religious Jewish schools.

“From the age of 0 until about 22, there is very little intermingling between the Jewish and Arab populations inside Israel,” says Gil. “As Jews, we don’t meet Arabs as part of our daily routine. So when we are thinking about co-existence as our life mission, we are at a difficult starting point because of this lack of interaction.”

The three Jewish students also spoke about the role of military service in their life. All Jewish males are required to serve three years and females are required to serve two years in the Israeli Army after high school. Gil told students that their high school counselors are military counselors instead of college counselors because their biggest concern as seniors is the unit where they will serve. The college process happens after military service.

Ultra-Orthodox Jews and Arabs are not required to serve in the army. Ashraf explained that Israeli Arabs can serve if they so choose and that raises their status in Israel, but serving is not common because fighting against their own people is contradictory.

“I feel I’m obligated to give back to my country but as a Muslim, who is Palestinian by ethnicity as well as an Israeli citizen, I do not to want to fight other Palestinians. Instead, many of us choose civil service and volunteer in hospitals and schools to give back to our community.”