It’s Hip to Be Square 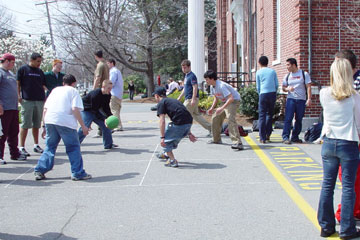 This spring it’s hip to be square at Milton Academy. A group of Milton seniors, Tom Pilla, Henry Masters, Evan McNamara and Russell Daiber recently reintroduced students of all ages to the game of four-square.

Popular on school playgrounds for a number of years, the game of four-square is a game of strategy, skill and quick reflexes.

Competition is fierce on the Upper School four-square court located in front of the Link building. During lunch, players lineup for a chance to test their skill in the 16×16 foot court. As players, spin, bobble and slam the ball in hopes of occupying the coveted number one square, a large crowd of onlookers gathers by the wall, cheering on their friends and classmates.

The Lower School has also caught the four-square bug, with three new courts recently painted on the pavement in front of Greenleaf Hall.

For those not familiar with the game, four squares are painted on the ground, all touching each other, making one, larger square. The game ueses a standard playground ball. Each player occupies one of the rank-ordered squares.

Once play stops, the player who committed the foul moves back to the lowest ranking square. The other players then move up to fill the vacancies. If there are more players than squares, that person goes to the back of the line, and the person at the front of the line gets to move into the lowest square and play.

There is no way to keep score in four square, which means the game has no winners and no ending. Play stops when the participants get tired.

A reintroduction to seven up may be right around the corner.