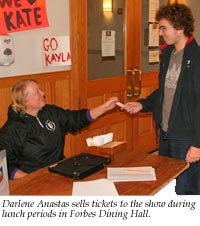 This year’s Class IV Play, Just Another High School Play by Bryan Starchman, presents a group of high school actors who have been abandoned by their drama teacher. The students find a box of scripts to work from and then have to fend for themselves in front of an impatient audience on opening night. Director Pam McArdle says that this year’s Class IV Play is full of fun surprises and physical comedy, and it samples the drama of playwrights from Albee to Shakespeare.

A long-standing tradition at Milton, the Class IV Play is a momentous and memorable class event. Nineteen Class IV students are involved in this year’s cast, and those who are not on stage are contributing behind the scenes, acting as ushers, or joining the audience in support of their classmates.

Performances begin at 7:30 p.m. on Thursday, November 18 and Friday, November 19, and at 7 p.m. on Saturday, November 20. Tickets are on sale this week during lunch periods in Forbes Dining Hall. For more information, contact Darlene Anastas at Darlene_Anastas@milton.edu.