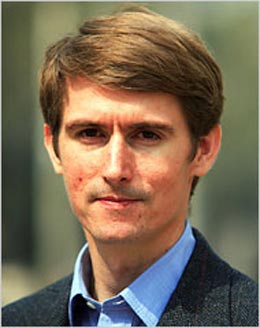 Jake Hooker ’91, reporter for The New York Times, has been awarded the 2008 Pulitzer Prize with co-writer Walt Bogdanich for their stories on toxic ingredients in medicine and other everyday products imported from China, which led to crackdowns by American and Chinese officials. According to The New York Times, articles in the team’s series, A Toxic Pipeline, “examined how dangerous and poisonous pharmaceutical ingredients from China have flowed into the global market. Reporting on four continents, Walt Bogdanich and Jake Hooker traced the illicit ingredients through traders and middlemen that formed a supply chain stretching from small factories in rural China to consumers around the world. The stories detailed the devastating, sometime deadly, human cost of this toxic pipeline.” Most recently, the two writers exposed the possible connection between 19 deaths linked to contaminated batches of heparin, the blood-thinning drug, and Chinese drug counterfeiting.

After Milton, Jake attended Dartmouth College where he concentrated in art history. His profile inThe New York Times tracks an independent path from college to his current role as reporter for theTimes: “For two years [Jake] lived in the White Mountain National Forest as a caretaker for several backcountry huts operated by the Appalachian Mountain Club. He was a volunteer in the Peace Corps in China starting in 2000. For two years, he taught English at a middle school in Wanxian, a small town along the middle reach of the Yangtze River, near the Three Gorges. In his free time there, he learned Chinese. He published his first newspaper article, about his life in Wanxian, in The Boston Globe in 2001. In 2003, Jake returned to China to work for the Surmang Foundation, a nongovernmental organization that runs a free health clinic for nomads in eastern Tibet. Western doctors work alongside Tibetans there; patients come on horseback. [Jake] translated for Western doctors and Tibetan doctors, bought medicine, wrote reports and met with health officials, Tibetan monks and other people in the Surmang Valley. [Jake] has traveled to most places in China writing about rural life, AIDS, ethnic identity, and archaeology. Since 2006, he has contributed research and reporting to a wide range of China coverage for The New York Times.”