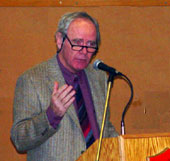 The relevance of religious self-criticism will be the focus of acclaimed author and columnist, James Carroll’s presentation to Class I students, Wednesday, October 23 in Straus Library. Mr. Carroll’s visit is sponsored by the Class of 1952 Endowment for Religious Understanding.

On the occasion of their fiftieth reunion, members of the Class of 1952 funded an endowment to promote the understanding of religious pluralism within the Milton Academy community. This endowment provides one or more annual forums for the discussion of the diverse faiths of the world.

Mr. Carroll, who is the father of a Milton alumna, Elizabeth Carroll ’98, lectures widely on Jewish-Christian reconciliation, and on the question of war and peace. His essays and articles have appeared in many publications including The New Yorker. A weekly op-ed writer for the Boston Globe, James Carroll is well known for his cultural critiques and draws upon his own experiences as a civil rights worker, anti-war activist and former Catholic priest.

In 1976, Mr. Carroll published his first novel, Madonna Red. Since then he has published eight additional books, Mortal Friends (1978), Family Trade (1982), Prince of Peace (1984), The City Below (1994), and An American Requiem: God, My Father, And The War That Came Between Us(1996). Carroll’s most recent book, Constantine’s Sword (2001) has been the subject of interfaith dialogues and conversations at synagogues and churches across the United States.

A Fellow of the American Academy of Arts and Sciences, James Carroll lives in Boston with his wife, the novelist Alexandra Marshall, and their two children.