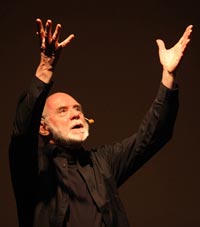 Award-winning storyteller, Jay O’Callahan, performed his original stories on Wednesday evening in King Theatre. Mr. O’Callahan, this fall’s Bingham Visiting Writer, has been dubbed “a genius” by Time Magazine and trumpeted as “a theater troupe inside one body” by the Associated Press.

Mr. O’Callahan has written and performed solo pieces at the Abbey Theatre in Dublin, the National Theatre Complex in London, the Olympics, the Lincoln Center, and the Boston Symphony Orchestra. His work has received awards from the National Endowment of the Arts, the National Education Film Festival, the Fund for U.S. Artists at International Festivals, Parents’ Choice, the New England Theater Conference and UNESCO. He is a regular contributor to National Public Radio. Most recently, NASA commissioned him to write and perform a story in honor of their fiftieth anniversary; he is currently performing Forged in the Stars at NASA locations around the country.