Jazz Educator of the Year 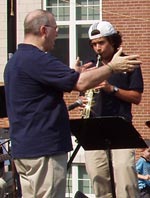 Bob Sinicrope, Milton Academy music department, has been named Jazz Educator of the Year by the International Association for Jazz Education (IAJE) in partnership with the Berklee College of Music. Bob is the first recipient of this award, which was created to honor the memory of John Laporta, legendary teacher at Berklee College of Music. Mr. Laporta taught at Berklee for 30 years, “becoming one of the college’s most respected and influential educators,” according to Principal Rick Hardy, who announced this award to Milton students. “In a 1995 interview,” Mr. Hardy noted, “Mr. Laporta said ‘I think I’ve been able to bring out the unknown talents in students. I think as a teacher I should be concerned about hidden talents, not obvious ones. We’re supposed to help people grow and become whatever they can.’”

Mr. Sinicrope, a former student of Mr. LaPorta, will receive the LaPorta Award and its honorary stipend at the IAJE annual conference in New York this January; Mr. Laporta’s wife will join the celebration. He also receives an invitation to speak at a major student assembly at Berklee College of Music, and is profiled in an advertising series for Berklee.