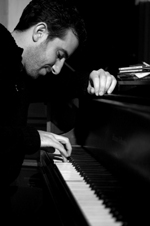 Jazz pianist Aaron Goldberg ’91 and his trio are performing at the renowned Village Vanguard in New York City on February 1 through 6. Aaron studied classical piano as a child, and at Milton, music teacher Bob Sinicrope turned him on to jazz.

“Bob Sinicrope is the reason that I play jazz music,” says Aaron, “in that he introduced me to the richness of the art form, and also gave me my initial skill set and the musical values that allowed me to become a professional touring musician.”

This is the first time Aaron and his trio are headlining at the Vanguard. He has performed there numerous times as a sideman with other musicians, such as jazz orchestra leader Joshua Redman.

Aaron says he and his trio will play a mixture of music from his new album, Home, and his next album—a collaborative project with Argentinean composer/arranger Guillermo Klein—as well as some brand new material and a sampling from a previous album, Worlds.

On Wednesday, February 2 at 9 p.m., NPR will Web cast the group’s Vanguard performance. You can listen by going to this link and clicking the “play” button when the page goes live. If you listen early, you’ll hear an interview with Aaron.